We continued to fish, and our line constantly caught on river weeds.  We tried to paddle where there were fewest weeds.  Each time the line caught, we had to stop and untangle it.  Many of the weeds floated free, perhaps shredded from their stalks by propeller blades.  When I felt the drag, I slowed to clean the hooks.
After 12 miles of river, we had a choice.  Rapids lay ahead.  We could pay 28 dollars to go around the rapids down the locks.  Without any idea how bad the rapids were, we erred on the side of safety and spent the twenty eight dollars at a small cabin in the side of the Chambly Canal.
Parts of the canal ran right beside the river, other parts veered off and away before coming back.  Bridges passed overhead, and a young canal worker drove from one drawbridge to the next to open and close them with our passing.
The locks worked manually.  The doors opened and closed with the turning of a crank, as did the pipes to let the water in and out.
Erin caught a fish!  A bit smaller than the previous one, but surely super tasty.  Freakishly long skinny fish swam in the green water beneath us.  I wondered what they tasted like, or if they were even safe to eat.  The fish that we caught just barely fit into a Nalgene for safe keeping.  When we waited as the locks waters descended we changed the water.
The one-room houses beside the locks that were now maintained as part of the park system had at one time been home to the lock masters.
At the very end of the canal, we descended three locks, one right after the other, to rejoin the Richalue in the town of Chambly.
We missed the big marina to the right and found a small one to the left instead.  There, a watersports and fishing outfitter happily volunteered to store our boats and lock our gear in his shack.  He told us we had a bass in our Nalgene.
A woman who worked at the outfitter spoke just enough English to offer us a ride to a bus station.  Friends of my brother lived in Montreal where we intended to stay the Sabbath.  They invited us to stay with them a few weeks earlier, but without a working cell phone I had not managed to contact them since then and no definite date had been set.
After navigating the train and bus system we managed to find their house.  Though surprised to see us, it only took a moment to make up a bed.  We offered our fish, which had died on the train, as a gift. 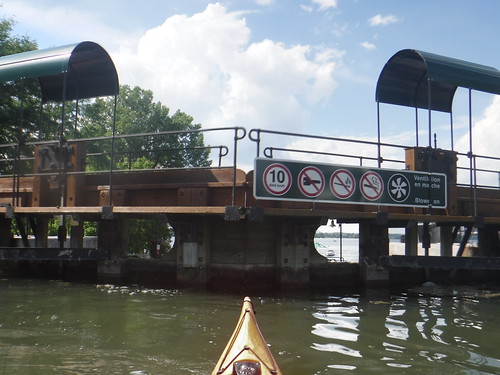