While paddling around a bend in the river, framed by woods as far as the eye could see, a vicious tug yanked the fishing line.  I pulled it in, and let it out, pulled it in, and let it out.  The fish grew tired and I reeled it out of the water.
It seemed a freak of nature snapping back and forth on the line in front of me.  It looked like the fish I’d seen in the Chambly Canal.  I was too scared to put the strange, large fish in my cockpit with me, snapping convulsively one more time, it escaped the line.  Erin made fun of me.
A tremendous current rushed out from La Tuque’s dam.  Some houses could be seen between the trees on the more gradual slope on the far side of the river.  The current parted around islands.  We didn’t see a portage, but a path wound down from some stairs on the cliff-like shore, so we parked and climbed, and found a backyard in the small town of La Tuque.  The owner of the backyard welcomed us with open arms.  He found an ancient pair of glasses that were close to my prescription, and gave us a ride to the supermarket.  We were welcome to set up our tent in his backyard.
We were not invited in to use the shower, the pool was ours to bathe in.  La Tuque, he told us, was the last edge of civilization.  North, we would only find First Nations, and not for some time.
He called a friend of his who lived on the other side of the river to help with our portage the next day. 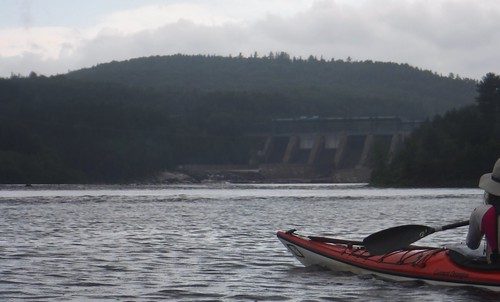