The original plan was to do the first week or so of the summer’s trip with friends, Amy and David. They canceled last minute, but would still prove to be a valuable resource. David’s parents lived in Montreal. We could stay with them overnight and catch the train in the morning to the spot on the river where we’d hailed the train finishing our 2016 trip.

Amy might have mentioned something about her inlaws not communicating so well with one another, but not to worry, they expected us, and would give us a ride to the station in the morning. We could leave the car in their driveway for the next month.

We knocked on the door, and waited.

An older woman opened the door in a nightgown. “Yes, what do you want?”

Erin and I stood there, a bit confused. We had thought David’s parents expected us.

“I’m Dov, this is Erin …” She showed no recognition. “We’re the kayakers.” Still nothing. We asked her if we had the right address.

“We’re friends of Amy and David. Did David tell you we were coming?”

“No.” She told us, opening the door a little more.

Erin was able to show her the texts she’d exchanged with Amy, but we were not invited in. So

be it. We’d find another way to make this work.

We’d ordered bear deterrents to the house: flash bangs for the 12 gauge, bear spray, and flairs. Shipping laws for these things made it easier to have them delivered in Canada than in the US. “No worries. We’re happy to find another solution. But we ordered a package to this address. Do you have it?”

And that was all there was to it. We’d move on.

“Where will you go?” She asked.

“We’re not sure yet, but we’ll find something.” we didn’t even have internet. Our phone service cut out at the border.

“If you’re friends of David, come in.” She told us, and ushered us into her house, and her kitchen, where she offered us cookies and bagels with cream-cheese.

After a light snack, Erin and I went shopping and to drop off our resupply package to be mailed to Matagami the halfway point. By the time we returned to David’s parent’s house, his father had come home. All was well. He had expected us. We were super welcome.

He had our package, minus the blanks that may have wandered off with his grandson. ‘‘He orders all sorts of things from the internet,” the old moroccan told us. “I assumed the package was for him.” (It had our names on it, care of David’s father). After perusing the contents, the young man told his grandfather that someone had sent them a box full of munitions. David’s father went to call the police, but spoke with David just in time to figure out that a stranger hadn’t mailed them explosives.

That night we had a cozy bed in a welcoming home. The next morning David’s father dropped us at the train station and then took our car back to his house to sit in his driveway for the summer.
Posted by Kayak Dov at 10:00 PM No comments:

Polar Bears, the Gun, and Canada


After too many hours on the road, we approached the US Canadian border in Vermont.

We had a shotgun with us. When we'd planned the trip, we planned for two months of paddling which would likely take us into Hudson Bay - polar bear territory. And despite my aversion to guns, experts and dopes alike unanimously recommended I bring a firearm.

We waited in line to get into Canada. Before leaving the US, I needed to check my gun out at the US border, Border Protection had told me over the phone.

We could see the Canadian border up ahead, as the traffic periodically progressed a handful of inches. Through the congested lane to our left, we just made out a third lane branching off toward what might have been US customs. No signs gave any hint. We asked the fellow in the car to our left if we could cut across, he said no. But the car after his let us through, and we cut across the traffic to just barely make it to the off lane before a separation barrier.

Ahead of us, the off lane parallel to the road lay open. A large beige brick building, probably American customs, stood off to our left. We drove down the empty lane beside the traffic choked road. A sign said to "stop here for declarations," beside an unmanned booth. We stopped. Nothing happened. I started driving again. Two hundred yards later, the lane re-merged with traffic, quite a bit closer to the border. We had inadvertently found a great way to cut the line.

I drove in reverse back to the stop sign, parked, and went toward the building. A friendly border patrol officer opened the door for me.

"Hi," I said as he let me in, wondering what on earth I was doing. "I'd like to fill out paperwork to leave the country with a firearm. I called in advance and an officer told me over the phone this was the surest way to get the firearm back into the country without trouble."

He could help me. I followed. He then directed me through a door which locked behind me. I waited with all the people held up on their way from Canada into the United States, and worried that I was in trouble. The door had locked behind me, what if I had inadvertently done something illegal with my borrowed gun, and they arrested me? What would Erin do? Would she be in trouble too?

I don't think of myself as a worrier, but I've had enough trouble with the law over the years to shake a bit when a door locks behind me.

But after just a couple minutes of waiting, the border agent called me up to the desk and gave me the form on which I would swear it was my gun. I told him it wasn't, it was my brothers.

The officer one booth over muttered, "It's not even his gun, heh."

But my officer thought about it, and told me the best thing to do was just say it was mine. And so I did.

We went out to the car to check the serial number on it.

I was scared to handle my gun. What if I moved too quickly and the border agent shot me? But that didn't happen, because I explained my problem to him, and the officer, understanding, removed the 40 inch shotgun from the 41 inch dry bag, and copied down the serial number. He also expressed admiration for my firearm. I glowed a little.

I got back in the car and we drove passed the traffic until our lane met up with the Canada bound road much nearer the border. It turns out it may be faster to leave the US with a firearm, than without.

We pulled up to the Canadian checkpoint, and handed the officer our passports and Canadian firearm paperwork in triplicate.

"I didn't ask for papers," the officer commanded at us. "Hand me just your passports." We took the paperwork back and handed him just our passports.

He reviewed them. Erin is a Canadian citizen, so she should have been easy. But when he asked her where her permanent address is, and we told him that she was between places right now. He didn’t like it. How was he to know that she didn't plan on staying in Canada?

"A lot of people think that they can come into Canada, but the items in the car are not a citizen of Canada. You may be trying to bring in a tv without paying taxes on it."

"We're going kayaking, and leaving the country in a month." I said looking up to the kayaks on the roof.

"And how will you support her during that month?" He asked me.

"We have lots of rice and lentils." I told him.

He didn't seem to believe me that I had so many rice and lentils. But I did, and would not be deterred.

(We also had beans, granola, spaghetti, wraps, peanut butter, cornmeal, energy bars, cheese, and who knows what else.)

"What was that paperwork you tried to hand me?" He asked.

He took the form, printed in triplicate.

I went on, "I didn't know if I was supposed to sign it here, or in advance, so I printed three with a signature, and three without."

I felt like I had done something terribly wrong. That I'd been getting everything wrong since I first opened my mouth. "I'm sorry, ... for being me?" I trailed off.

He told me to drive around the corner. Someone would inspect my firearm while I stayed in the car.

The officer who inspected my firearm was friendlier and more helpful. In short order we were back on our way, everything had worked out.
Posted by Kayak Dov at 5:00 PM No comments:

Erin and I had set out to kayak from New York to Hudson Bay. On our previous leg, we’d made it as far as Senneterre, all the uphill bits, and maybe a quarter of the downhill bits.

Now we drove our station wagon up north, boats on the racks, gear in back, to pick up where we had left off. Months of planning would come to fruition, if only we could get out of Teaneck without the car breaking down.

But we couldn’t. The back of the car lurched violently every time we hit a bump in the road, and unfortunate sounds emanated from under our gear. We moved the gear around just in case we’d packed wrong, but that didn’t help the fact that one of the shocks had blown.

We didn’t know what the sounds and shaking were about, since Erin and I are car illiterate. We might be able to make the drive up to Montreal in spite of the lurches, but better judgment prevailed and our kayak laden subaru pulled into the local mechanic’s lot. Amato knows me much too well.

He kept his staff there late, welded the cracked shock back together rather than wait a week for the new part to arrive, and we were on our way again Sunday morning.

We made it out of Teaneck.

Pictures!
Posted by Kayak Dov at 8:00 AM No comments:

A special thanks to Don White who spent untold hours augmenting beautiful maps for our upcoming expedition.

You are a gentleman and a scholar! 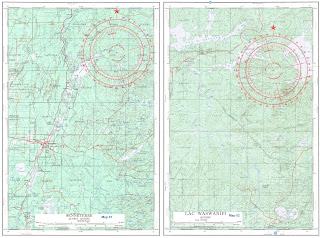 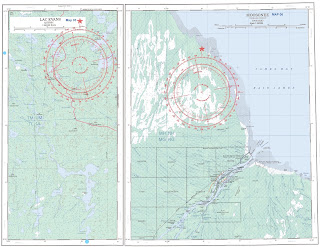 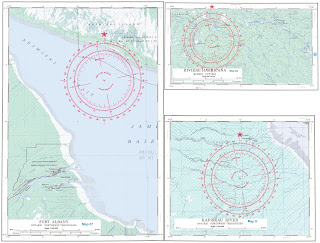 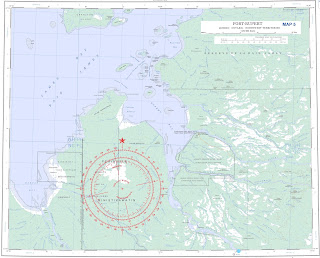 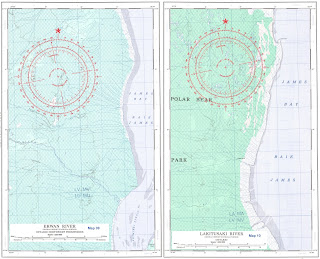 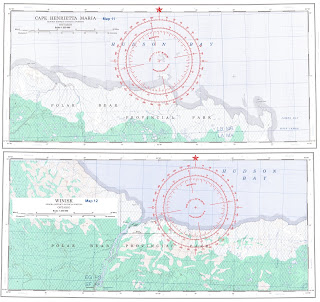