Not far up from our launch we found big rapids.  Paddling up them would be impossible.  Mary, the night before, warned us that we’d find a popular local white water kayak hangout, and a portage.
The trail began at a dock on an island.  I scouted it out, lost the trail, and ended up bushwhacking to an obvious put-in.  From there, I followed the correct path back to our takeout.  The trail, often flat enough to use our kayak cart, was marred only by swarms of mosquitoes.
As we paddled beneath a cluster of suburban houses and a small party dining on their porch, Erin’s fishing line went taut.  “I caught a fish!” She yelled as she reeled it in.
One of the women eating above called back down to us “You caught a fish?”
The fish escaped.
As we got closer to the Grand Mere dam, the current picked up.  Passing under a final railroad bridge before Grand Mere took some effort, but we were rewarded with the sight of the boat launch. About 750 meters before the dam, we had a long portage ahead.
We asked a jet skier if another ramp lay closer to the dam.  Nope.
We crossed the now wide river at a strong ferry angle against the current and took out.
After unloading our gear beside the ramp’s parking lot, we took the first boat up, then made a couple of trips with dry bags depositing our things at the top of a steep path from the road down to the water.  A car with roof racks passed us as we returned to our takeout to get the second boat.
The car came back.  The driver, a local kayaker who spoke no English, invited us to stay with her and her husband for the weekend.  While I didn’t understand her words, her hospitable smile was more than enough to make her intention clear.
They had a shower, laundry machine, tools to fix our broken pot handle, and wine. 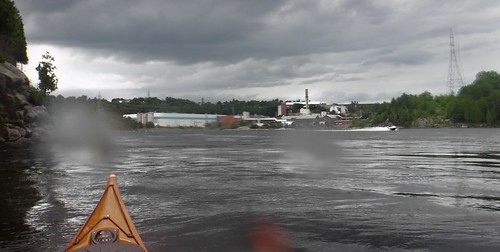