With heavy rain forecast, we set out wearing our drysuits.  The river narrowed.  The current grew strong, and as we worked our way into the flow, my line caught on something.  I pulled it in, and it yanked against me.  It had somehow gotten tangled in another fishing line.  I cut it free, pulled it and found, caught on the hook, an enormous, one-eyed fish.
Before it could flip free, I had it in my cockpit and removed the hook from it’s mouth while Erin held it firmly.
During the process, we’d floated downstream and now worked our way back up, excited for the evening’s feast.  Five oncoming canoes cruised past us with the current.  They didn’t say hello.
Sweating from the effort, we stopped to take off our much too hot drysuits.  The forecasted storms  were brief, intermittent showers, and cooled us not at all.
Hours against the current, we found a dock.  Another bunch of canoeists sat and had lunch.  They’d paddled down from the Gouin reservoir that lay ahead of us.  The current wouldn’t get much stronger than where we were, but then again, we would find waterfalls upstream.  Their summer camp ran multi-week trips down the river.  They’d never heard of anyone going up it.
We got back on the water, but as we approached a bridge, the current grew so strong that I only barely got through a choke point, and Erin couldn’t, near the edge, or in the center.  Above, a storm approached from the north.  Who knew how much water it had let loose up stream.
We returned to the dock where we’d met the canoeists, now gone.  Above the dock a path led through the woods to a gas station and  a hotel.  The gas station threw me out because I was barefoot  The hotel gave us drinking water, but refused to let us set up camp on their ample property.
As the heavens unleashed watery fury, we sat on the hotel’s porch and drank hot fish soup, then gorged ourselves on the one-eyed monster. Bellies full, we made camp on a woodsy  lumpy spot just above the dock. 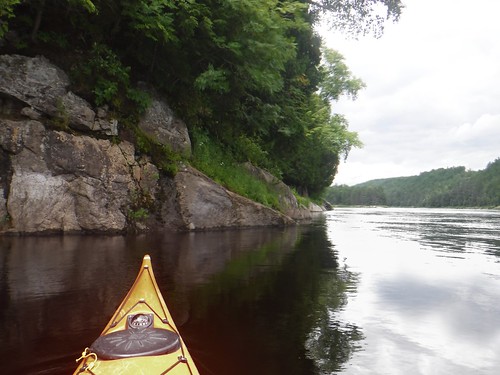