One by one, we wheeled the kayaks up a steep road to the top of the dam where a locked fence blocked the new section of river.  A Hydro Qubec employee in a bright orange vest with the tiniest bit of English at his disposal opened the gate and told us to be careful not to get sucked into the turbines.
He also warned us that danger lay ahead, just before the railroad bridge.  We need to paddle the third path from the right.
As we neared the bridge the current picked up, approaching but not reaching what it had been the day before.  With some strong sprints we made it up the V current formed between the shore and an island, and then under the bridge.
After the bridge the current slowed and we crossed the wide river as storm clouds approached.  As we paddled past a dock with seaplanes tied to it, the heavens opened up and it poured.  We discussed taking out and finding shelter in the sea plane marina.  We could change into weather-appropriate clothing, but decided instead to continue.
We caught a fish, and talked about the tasty warm fish soup we’d make when we landed.
The rain subsided and the water calmed to glassy smooth as the river narrowed on either side around an island.
The dam in Shawnigan did not have an obvious take-out, so we paddled into a small bay with Hydro Quebec buildings on either side. There,two young ladies on a catwalk bridge above us called out that we couldn’t be there since we were beside an electrical dam, and that it was dangerous.
One of them showed us where we could land and told us we could take the road through the electrical plant, up the steep hill, to a dock on the other side, a kilometer or so from where we were.
I gutted the fish while Erin scouted the road to make sure that there really was a way through, then Erin got the soup started while I wheeled the first kayak through the plant and up the hill on our collapsible cart.  A man stopped me, but when I told him I had permission he let me go on my way.  I left my kayak just inside of the plant’s security fence at the top of the hill.
On my way back down a different orange-suit stopped me, and began to interrogate me.  He asked me lots of questions, some of them recurring as though my story might change.  What was I doing there?  What was the name of the person who gave me permission?  Didn’t I know I was on private property.  Where were these kayaks I kept talking about?  Where was this other person who I readily admitted was also on Hydro Quebec’s private property.
I walked him back to the second boat and our gear spread out on the lawn waiting to be hauled up the hill.  He spoke to his supervisor on the phone and confirmed that we couldn’t be there.  He opened a small locked gate only a few yards from where we took out.  Behind it, a small, heavily overgrown dirt road cut steeply up the hill.
We would not be allowed to roll our boat up the smooth winding road.  We’d have to carry it up the hill in the woods.
A crew of orange suits now watched us haul our gear, soup in the pot, and final boat outside of the private property.  When I stepped off the wet grass to carry my gear toward the gate a slightly roundabout (maybe 5 feet longer?) drier way on the road, one of the new orange suits yelled at me.  He wouldn’t let me sneak into the plant again.
The original orange suit agreed to meet us at the top so we could get our kayak.  Once our gear was out, he locked the gate behind us and we began carrying our boat and gear through the woods up the steep hill, then retrieved our boat.
Exhausted from our repeated heavily-laden climbs, we sat on the grass and ate our soup, still hot.  The original orange suit showed up.  We had hoped we were done with him.  He told us that he wished things could have worked out differently and that held only done his job.
After our rest, we wheeled the boats down to the waterside park on the other side of the hill and made camp besides a public dock.  A whitewater paddler named Mary, walking her dog, recognized us from a post I’d put up on Facebook a month earlier.
She gave us a ride to a supermarket and let us charge our electrical gear in her house overnight.  The supermarket meant an extra nice dinner, with premade pasta sauce, extra cheese, and canned chickpeas. 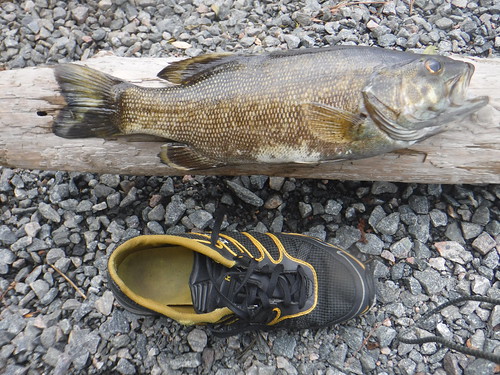