Our hosts from the night before told us there’d be good fishing beneath the rapids just ahead.  Our map showed multiple rough spots.  We’d have to portage and it would be a long one.  No roads, but train tracks did run through the wilderness beside the river.  If we couldn’t find a trail, we’d take the tracks, and try not to get hit by a train.
When we arrived, I paddled back and forth across the river beneath the lowest set of rapids trailing a line.  I didn’t catch any fish.  We found no sign of a portage on either side of the river.  Erin set out to search the left, and I the right.
My vision isn’t that bad without my glasses, but it’s not great either.  After climbing tree roots up a six foot vertical ledge, I set into the woods.  Moss spread out beneath the trees, over rotting logs and mounds, around pines and birch.  Fewer branches reached out where I stepped through the shade, more up above.  Islands of sunlight suggested I might find an abandoned road, or portage trail; animal tracks turned into nothing.
I hiked up along the river, away from it and back.  When satisfied that the portage must be on the other side, I got back in my boat and met Erin returning to hers.  She too found nothing.  She didn’t even find the train tracks, which the map said should be there.
We set into the woods together to find the train tracks.  We climbed a steep hill, hands pulled at trees and feet dug into moss and earth, or looked for secure perches to push off of.  From the top, we climbed down to a gully, then up again and through the woods.  The tracks lay only 100 meters from the river, but through a strange wilderness, it was a long way.
We walked north west  along the tracks.  Walking on train tracks is hard.  We had to change our gates to match the planks, or balance on the rails.  We searched for a path down to the water, anything to suggest that the canoeists we’d met coming down the river had portaged this way.
A train’s whistle howled in the distance.  We climbed off the track and waited.   And waited.  The rumbling grew closer; finally, it passed.  We climbed back down to the tracks and continued.  After a time, without any sense of how far we’d come, we headed back to the river to see if we’d passed the rough section.  We found more rapids and a strong current.  Nothing we could paddle up.  We hiked up and down the edge of the river before returning to the tracks.
Feeling a little hopeless, we continued west.  A bear lay in the tracks up ahead.
From our distance, we waved and yelled, raising our hands above our heads to shoo it off.  It stood, looked at us from its sunny resting place, and did not shoo.
We returned to our boats to look for a portage trail again on the other side of the river.
Erin found it.  A band of orange tape hung from a half fallen branch.  A barely discernable trail lay underneath.  We followed it.  Sometimes the trail blazed clearly.  Other times, we got lost, and then more lost, before finding it again.  The trail took us through thickly clustered pines, from which we could barely defend our faces.  It took us over several streams.  One had an old log bridge, another we stepped through.  Then, it became clear, beautiful, and well maintained.  The upper half, around the worst rapids, had seen regular use.  The lower half, around rapids one could paddle down but not up, lay abandoned.
Where the old trail and the new trail met, a third led away from the water into the woods.  Not far in, we found a cabin.  The door stuck, nailed shut, the windows boarded over.  A phone number had been written on the wall.  We couldn’t call it without reception, or for that matter, with a phone that didn’t work in Canada.
Beside the small cabin stood a work shack.  Rope hung from rafters beneath the sheet metal ceiling, and a pack frame hung from a nail on the wall.  The Vietnam military-era frame met  our portage needs perfectly.
We hiked back to the boats, tied to a root floating on the water, losing the trail a few times, and continued east to look for a place we could take them out of the water.  We chose a site where a small stream cut across the path and through the stubby waterside cliff.
We took our boats out, and began the portage to the nice trail, half the distance to the put-in under the railroad bridge.  Erin balanced the duffle bag on her head, because she’d seen people doing it in India and thought it a good way to carry things.  I had the pack frame on my back, heavy with as many dry bags as we could tie to it.  The rough straps dug into my shoulders.
With an additional bag in each hand, and Erin’s occupied with the duffel, nothing protected our faces from the tightly packed pines that tore at our cheeks and slapped at our eyes.
Eventually, we again found the nice trail, and at its beginning, a pretty little beach with a fire pit. By the time we’d arrived, with exactly the gear we needed to make camp, our day had ended.  We’d finish the portage tomorrow.
Resting beside our beach campfire, the rapids poured in front of us, and the air flowed with life.

The next morning we scouted the trail into the forest.  Farther back we found a second shack with tarp walls protecting sealed plastic blue barrels.  Our trek into the woods eroded our hope with doubt.  We didn’t know what we might find around the next corner, but hoped it would be good.  The blue barrels didn’t quite make the cut.
Back along the river, after crossing a few more streams, we found another campsite on a stone beach besides the biggest rapids yet.  A couple of fresh lemons, and an egg in the middle on a frying pan lay beside a grill.  Firewood sat under a plastic tarp.  The camper was nowhere to be found.  Farther up, we discovered the put-in beneath a railroad bridge.
We then went back down the bad trail, parts of it always new, parts of it always the same, and resumed our portage.  After our first run we met Richard.  He liked to spend the summer along the trail, and was largely responsible for its beautiful maintenance. He’d spent so much time alone lately, that he was as happy to meet us as we were him.
He helped us with our portage by lugging gear, and when we finished, just before the end of the day, he gave me a fishing lesson on a shelf, shallow in the deep rapids.
Over the Sabbath, he shared his food with us and told us a lot about the river up ahead, which he’d canoed extensively. 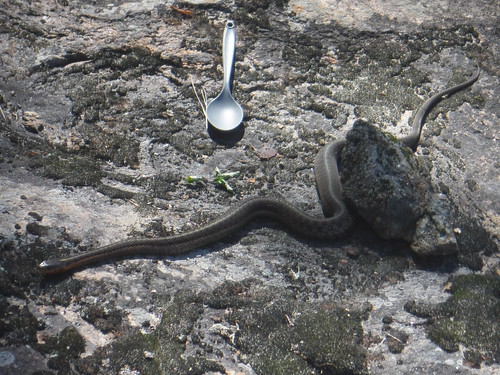