Marlene, our hostess, wanted to help us in any way she could. She took us to a fishing store to replace our lost lures, only it was closed on Sundays.  We tried a second, and then a third.  The third store had an ice fishing rod, only a couple of feet long, and perfect for trolling a lure behind the kayak.  The mechanical settings made it far more suitable than our plastic donut.
By the time we arrived at the dock, the day had warmed and I  wore my hat as we packed the boats.  Since we were only packing and not paddling, there was no need to tie my glasses on yet.  Finally, we launched.  After I spent the sabbath talking technique and form with my hosts, I demonstrated a roll and came up without my glasses. I forgot to tie them on.
Since Marlene had spent so much time driving us around, I didn’t want to impose on her to take me to get glasses after losing them like a dope.  I also didn’t want to spend the rest of the trip without glasses.
After waving goodbye and fifteen minutes of paddling, we found a fellow walking down by a dock with a little girl and asked him about glasses.  He took us up to his English speaking family at their mansion.  His mother brought us lemonade while he called anywhere that might have glasses for me within a reasonable distance..  No luck–Optometrists were closed on Sundays.
We launched.  Motor boats zoomed about every which way and fish cowered in hiding, without so much as a tug on the line.  At first we passed country communities on either side of the river, but by the end of the day they had worn thin leaving a highway along the right side of the river and forest on the left.
We pulled up to the “Teepee Ranch,” which had lots of scarecrows and teepees.  I told the proprietor our story and asked how much it would cost to stay for the night in our tent and use their shower.
“No problem,”  he said.  Free was excellent.  He then showed us our options. We could stay in a teepee, a small cabin, or a nice cabin with a jacuzzi.
Hmm, “How does pricing work?”  He showed us the pricing chart.  Free was a misunderstanding.
“Where can we pitch are tent for free?  We can’t really afford to stay here,” we asked.  He pointed across the street toward the river and explained something we didn’t really understand.
We setup our tent across the street and began making dinner beside the highway.  Trucks zoomed by.  The proprietor came over and explained.  He hadn’t pointed across the street earlier, he had pointed across the river.  He suggested we make camp on the island across the river.
We’d unpacked our gear.  After dinner, we’d go to bed.  We weren’t about to get back into our boats and paddle across the river.
The proprietor told us the police patrolled the highway and we’d get a ticket.
We moved down to the dock.  The police wouldn’t see us there.  We couldn't pitch a tent, but unless it rained, we wouldn’t need to.
His wife came down and talked with us.  She clearly felt guilty about our predicament.  Erin got permission to use the bathroom, and then we were on our own.
The mosquitoes came.  The netting that we’d previously used when tentless no longer sufficiently protected us against the horde.  Somehow, though, we slept until the rain came.  Then we set up our tent in the dark, perhaps faster than anyone has ever set up a tent before. 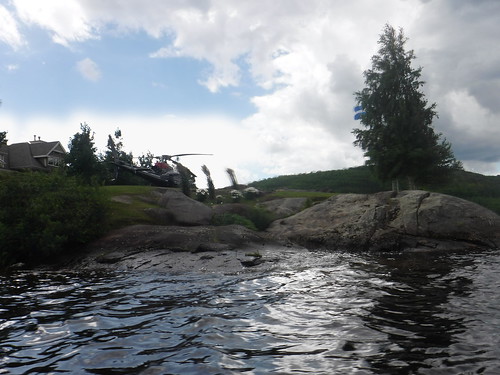