We began by using the lee of an island to cross the river below the current.  The dam loomed just ahead, tumultuous water pouring out of it.
On the other side, we met a friend of our night’s host who had a house on the water.  Besides giving us and our gear a ride over the dam, he gave us fresh chicken eggs from his chicken, which we got to pet, and vegetables from his garden.
Finding the launch north of the dam proved to be easier said than done.  The first trail we went down, toward the water, turned out to be long, full of strawberries, and a dead end.
We drove over a bridge, and found a short easy trail with raspberries on the other side.
I caught another one of the funky fish, which later I learned was a northern pike.  Having steeled myself against chickening out in a moment of panic, I plopped it in my boat and removed the hook without hesitation.
As we navigated between the islands of a lake, two fawns and a doe picked their way along the shore.
The current grew strong, and we couldn’t get up it.  We crossed and tried the other side of the current.  There too, it flowed too strong.  We tried along the shore, and failed.
Erin and I had a fierce disagreement about whether or not a particular body of land was an island or a peninsula.  On inspection, Erin won.  Rightfully, she poked fun at me for it at every opportunity.  On the other side of the island that was not a peninsula, the current still flowed too strong.
The last time we’d hauled boats up the river, we’d decided, in retrospect, that it might have been easier with shoes.  We pulled over to the wooded shore, quickly failed to find an easy portage, put on our shoes and helmets, and then began our waste deep hike up the river.  Shoes did make it a lot easier.
Back in our boats, we arrived at Beaumont Dam.  Steep hills rose from the dammed gorge.  Just to the right were some rocks we could climb, so we tied up our boats and investigated the potential portage path.  At the top, we found an electric fence.  For safety reasons, we did not wiz on it.
We climbed back down, and tried a different spot. Hands gripping vegetation, we pulled ourselves up the incline, boats tied to and resting on the rocks below. We found the same fence, but this time with a path beside it.   The path led us to a  road and we explored the area around the dam.
In search of a take-out, we followed a path along the top of the gorge, but it kept on going when we were ready to turn around.
On the upriver side, well above the dam, we discovered a boat ramp.  To get there from a take- out below the dam would be a long haul, but along a paved road and then a dirt road, not too much trouble with our cart.
Walking back toward the spot where we came out of the woods, a car passed us.  We flagged it down and asked for directions to the portage take-out.
The driver’s directions led us back to the path through the woods.  This time we followed the path farther, until we arrived at a clearing where we eventually made camp for the Sabbath.  At the edge, a the path led down the cliff.  We climbed down.  Rocks and earth slid out from under our feet.  At the bottom, we some rocks beneath a thick growth where we could take out, with a great deal of caution.
Jet skiers cruised by on the river, and with them we hitchhiked back to our kayaks.  We’d left them on the rocks, but the water had risen and they floated.  Lucky thing we also tied them up.  We thanked the jet skiers and paddled down to the take-out.
With a pulley, rope, lots of treacherous climbs, and stops to munch on blueberries, we got everything to the clearing.
In LaTuque we’d bought cream cheese, olives, and other yummy things for the Sabbath.  Together with our catch, we ate delicious food and rested after a long week of paddling. 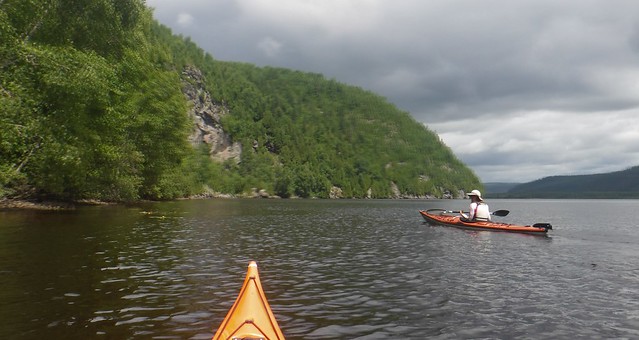