Our last day of the summer had begun. I needed to get to my new job so that they could fire me six months later, and Erin too had to return to the real world.
The rapids began at the end of the lake. We slid down the first set, and then portaged around the second. We lost the trail a couple times, but found blueberries, so it was exactly the right sort of portage to wrap up our trip.
For the second set of rapids, our guidebook said we needed to be careful of the big rock at the end.
Some of my readers may recall that I said we would destroy one of the boats in rapids. Well, we did, and since my story so far has been to the best of my recollection, and I recall exactly when we destroyed that boat, it’s coming.
I rushed down the rapids. The rock hid under a wall of water blasting up around it. I took the drop to the right, and then tried to stop to warn Erin around the rock. But the current jostled me at least another hundred meters before I could pull over.
When Erin came down the rapids, I yelled my warning, but she did not hear me over the watery roar. She went over the rock. Her boat projected through the air. The stern hull landed hard on the rock’s peak, and the bow floated in the pull of the current below. Erin’s boat rotated and she hung upside down, her head slightly dipped in the water.
She tried to roll, but suspended as she was, it didn’t work. She let herself out and pulled her boat from the rocks as the current ran her toward me.
I sprinted from the side, latched my contact tow to her boat, and paddled with all my strength toward the shore. The next set of rapids rushed toward us. I could not overcome the current. While I pulled, she tried to climb into her boat, unsuccessfully. I didn’t make it to the side of the river in time, the lower rapids were on us, and I detached myself from her boat.
I paddled down, and pulled into an eddy below.
Her boat, the Solstice, stuck tight, pinned against rocks in the rapids. She climbed onto them.
We made a plan. She’d push her boat into the main current, I’d catch it below. Then we’d get her sorted out.
With colossal strength, after attempting several times to empty the boat, only for  the current to swamp it again, she dragged the boat through enormous pressure against the rocks to freedom.
A moment later, the rapids pinned it again, and she repeated the process.
Eventually, the boat floated out the bottom of the rapids. I towed it to shore, then went to retrieve Erin. She held onto my boat and swam while I paddled to the water-edge rock where I’d parked the Solstice.
The stern and cockpit had severe leaks. The bulkhead between them was obliterated. The bow compartment only leaked a little. I had the materials, Fiberglas and epoxy, to do a serious repair, but it would  take days. Our train would come the next morning, and anyway, we didn’t have food for days.
I used my entire roll of duct tape to hold her boat together and keep the water out. We consolidated all the equipment in my boat, and the dry bags once full of food, now empty on our last day, we filled with air and packed them into her boat.
We continued downstream. I caught two fish!
We pulled out of the final set of rapids right in the middle, underneath the railroad bridge, and set up camp. Whatever we didn’t need for the night, we climbed up to the tracks above.  After two fish for dinner, we spent our last night in the wilderness. 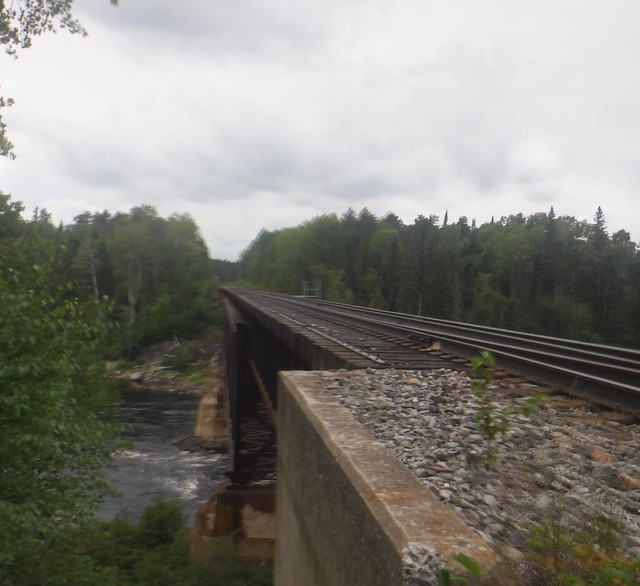 The next morning, at four am, we woke up, packed, and climbed to the tracks. A thick fog engulfed the bridge. I stood with my flash light, ready to point it at the train, and Erin waved a paddle with a neon shirt tied to its end.
Just after dawn, the train crossed the foggy bridge, and stopped for us. The conductor helped us get our boats into the baggage car. Richard had told him we’d be coming. We sat in the single passenger car.
The rain rolled back down more or less along the same route we’d paddled up. We watched much of our journey rewind past us at 40 miles per hour. When we passed La Tuque, my cell phone briefly turned on for the second time since arriving in Canada.
Ten hours after miraculously stopping the train, Richard picked us up at the station in Montreal. We spent the night in his guest room, and the next day he gave us a lift. We spent Shabbat with my aunt and uncle on Lake Champlain, and began recounting our story as a thing of the past.
Thank you Erin, for making this expedition so extraordinarily special. Without you, there’s no way I could have gotten through all those portages. With you, I flew as though I had wings.


Two weeks later, and skinnier than I’d been in years, my doctor diagnosed me with Giardia.
Posted by Kayak Dov at 10:08 AM