After a little over a mile, we arrived at our first portage.  Erin climbed a steep sandy hill to look for it.  There seemed to be a road at the top.  I pulled myself up a boulder along the water.
The river flowed over a shelf, and I found the portage trail right beside it, no hot chocolate.
An hour later we arrived at the next set of rapids.  The canoe girls had told us the portage would be on the right side of the river.  The rapids ahead had two distinct sections.  Above, the river thundered down the steep incline, below it bounced around between boulders with too much force to paddle against.
We took out at the bottom of the lower rapids.  We found litter, a good sign that we approached the portage.  After combing the banks, we found it.
We pulled our loaded boats up 500 feet of the lower rapids. Where the water ran too deep or the current too strong, we pulled the kayaks over the rocky shore, until we arrived at the bottom of our climb.
First we hooked the pulley and an assisting rope up to a tree at the top of the sandy eroded path.  Then, we attached the other end to the boats after emptying them.  After numerous trips, we got all of our gear to the top of the climb, then followed, back and forth, an easy trail to the put-in, about 500 feet above the curve in the river where the monstrous rapids began.
The next set of rapids was a little less than a mile.  This time we found the portage right away, and  began another climb.  This trail had blueberries.
We found a small spot to pitch our tent, having moved about half our gear through the portage.  Erin began preparing dinner and making camp while I finished the lugging.
Finding a suitable tree for bear bagging, where the bag could hang far enough from the trunk and other branches that no bear could reach it, didn’t work.  So I tried tying a rope between two trees and hanging the bag from that rope.  That didn’t work either, and we went to sleep again with our food in our boats.
The advantage of putting the food in the boats was that small critters couldn’t get it and bears were hopefully less likely to smell it.  The disadvantage was that if a bear did decide she wanted to get into the boat, then our kayaks would have offered little more resistance than wrapping paper. 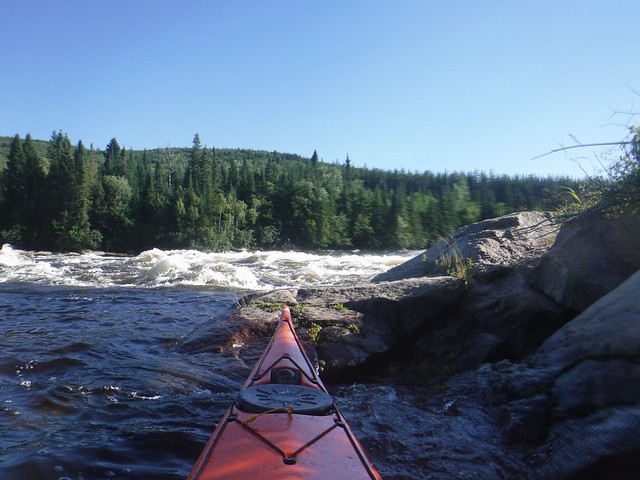