After rising from our soft mattress, our hosts drove us to our boats with all our gear.
The river flowed noticeably against us, but we made steady progress.  With slightly less draft, Erin paddled over some shallow sand that I went a couple hundred meters around.
A small pike escaped my line just before I pulled it in.  Later, we snagged a big one.  I pulled the beast out into Erin’s boat.  Excited by the enormous dinner we’d have that evening, Erin held the slippery, scaly, muscular giant, while I worked to pull the hook from its jaws.
It writhed, and snapped free, then flopped out of the boat.  Still hooked, I tried to pull it  back up, but it bit the line, and swam free.
So big.  So tasty.  So gone.
The current grew stronger as we worked our way up-stream.  A burnt or logged forest stood behind a sandy steep shore.  A road without traffic ran along the top of the water-edge, steep incline.  On the left, we paddled past thick trees.
A bear crossed the river.  At first we thought we saw a log.  But then we got close.  Without a doubt, a bear swam across the river, working hard against the current, not quite as agile in the water as a kayaker.
Erin wanted to hug him.  He did look huggable.  No hugging took place.
He climbed out of the water on the left shore, bolted up the incline into the woods and disappeared.
Farther upstream we arrived at rapids.  I barely pushed through.  Near the top, as I leaned into a hard turn, so as not to be thrown back down during my final sprint, my shirt caught on my fishing hook.  I had to ignore it or lose my progress.  As I swung my body around for another stroke, the hook tore free, taking part of my shirt with it.
Erin couldn’t make it up the rapids.
I waited at the top, while she tried again and again, and failed.  I found a path leading down to the river.  If it was man-made, I might find a portage for her.  If it was bear made, I might find a bear.  I found neither portage nor bear.  When I came back down, Erin worked fiercely on the far side of the river.  She made it.
Reunited, we continued on.
We’d planned on staying in Qinze Milles for the night.  We didn’t know what we would find, but on our map, the name of a town marked the intersection of two forest roads.
We found a campsite down by the water.  We followed the roads for a ways through the woods.  Erin called the moss that carpeted the forest, “elk moss.”  Or at least, that’s what they call it in Norway.
A fat rabbit hopped through the woods.  We didn’t see any Elk.  Trees lay fallen across the old forest road.
An old van lay abandoned in the woods.  Someone had started to build a shack near our campsite.  A metal cot with no mattress, and a steel wood stove rusted near the water.
We decided to bear bag our food.  I tied our pulley and some carabiners to the end of the rope to give it some weight, and then threw it over a high tree branch.  Or at least, I tried to throw it over a high tree branch, but it got stuck up there.
Erin and I looked up.  We yanked on the rope, it didn’t come down.  Erin tried to climb the tree, but didn’t find enough branches.  We tried to pull at the rope from lots of different angles, but our pulley and carabiners were still stuck up there.
We tied a rock to the other end of the rope, threw it over the branch (succeeding only after many tries), and pulled the whole business down from the other side.
It’s a good thing the other end of the rope didn’t get stuck up there.
The mosquitoes came out, and our fishless dinner burned a little while we worked on the bear bagging.  When we got into our tent, mosquitoes swarmed in with us.  We tried spraying them with mosquito repellent.  For the rest of the night, the tent stank of toxic fumes.
A critter made noise just outside.  Bunny or bear?  I didn’t know. 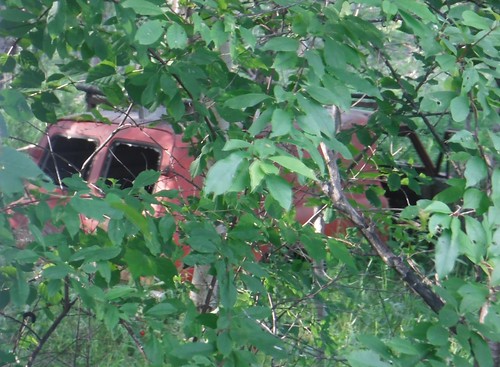