With blueberry laden breakfast in our bellies, we set out onto the tranquil waters of the reservoir.
We paddled around and in between islands, by grassy fields, and into a mild headwind over a couple of crossings.
Fishing on the lake without a permit was prohibited, and  law enforcement on the lake issued severe fines.  We were ready.  If a boat approached, I’d drop the reel under my skirt.  Hopefully the line would be sufficiently invisible from any distance.
A small motor boat approached.  It lacked sirens and anything to identify it as law enforcement.   But the two men on it wore uniforms, and by the time I saw it, they’d cruised close enough to see any of my sudden attempts to hide my fishing reel.
I leaned forward into a more aggressive paddling form to obscure the view of my skirt.  The officers stared at us as their boat slowly passed.  I smiled and nodded.  We kept on going, and so did they.
Halfway through one of the crossings, a fish had my line.  I let it run with it.  I tried to pull it in, but it wanted to run more.  I pulled it in some, and then it ran more.  The fish was indefatigable.  I pulled it in slowly, and it came.  It fought, but then it came in some more, and finally, we saw the fish beside our boats.  A Great Northern Pike, it’s head as big as mine, looked up at us.  It’s giant body curved into the depths beneath.  I tried to pull it up.  It snapped and thrashed, freed itself and vanished.
My heart crashed against the walls of my chest.  Such a large and alien creature had never been meant to be so close to the water’s surface, let alone, seen by men.
We continued on, severely rattled.
For the first time in ages, no current pushed against us,  but the wind picked up where the current left off.  It had started the day before, and continued unabated.  Apparently, the wind on the Gouin reservoir usually blows from the west.
Our destination for the weekend, the Atikamekw’s town, Obedjiwan, appeared around the corner of an island.  We pulled up to a small beach freckled with broken glass, and entered the reserve.
The residents of the small house across the beach did not speak English very well, but managed to understand our request to pitch a tent in their yard, and were happy to oblige.
They also made some phone calls.  The vice principal of the local grade school spoke English, and came by to offer his services in any way he could.
What did we want?  Just to pitch our tent, find the supermarket, and be on our way on Sunday.  They were happy to oblige.
The deputy mayor came by with the town driver in the town’s van to welcome us.  They gave us a lift to the supermarket.  The van didn’t have any seats in the back, but a kitchen chair had been screwed to the floor.  Erin sat much more securely on the floor.
After we finished our shopping for Shabbat, the deputy mayor gave us a tour of the town.  We saw the school, the police station, drove up to a high point with a view, and heard a French monologue that undoubtedly contained everything anyone could want to know.
“Do you want art?”  the driver more or less translated for us.
“Sure, we’d love to see art.”
We found ourselves in the deputy mayor’s grandmother’s house.  The elderly woman wanted to sell us homemade dolls of First Nation’s people and their children.  The dolls were beautiful.  But a delicate First Nation's doll wouldn’t fit in our boats.
Between the tour of the town, the offer of hospitality, and the kindness, we felt indebted to our hosts.  We tried to make a contribution to the woman’s art without buying a doll, and once she understood what we were saying, she handed our money back.
The deputy mayor gave us a ride back to our tents, still happy to have us. 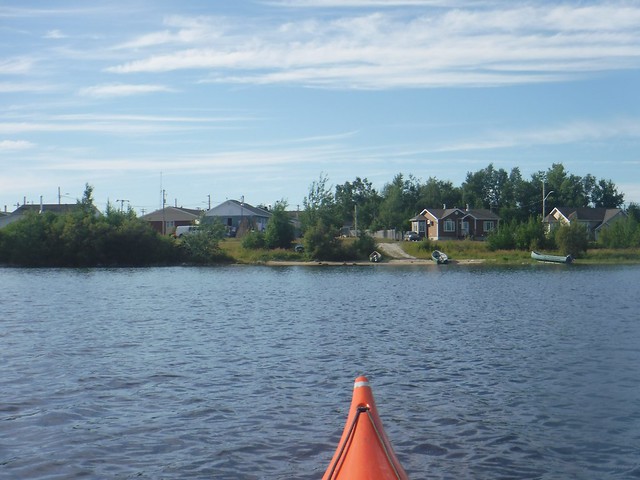 Dogs roamed the town, and we connected with a puppy.  When our olive oil container spilled inside our boat, the little guy joyfully climbed into our hatch and cleaned it up thoroughly.
He also stole our chocolate nibs and one of our bags of chia seeds.
Saturday night, Erin and I studied our map and planned our route for the next day.
The forecast called for rain overnight, and the owners of the yard we’d pitched our tent in invited us to sleep inside.  But many people slept in the house, all related in one way or another.  We thanked them for their offer but told them our tent would keep us dry.
A young man who had been introduced to us as a cousin spoke a little English.  He looked over our shoulders at the map we studied.
“That’s amazing,”  He said.  “Can I borrow it?”
I was pretty sure I’d never seen it again.  But how could I refuse someone who’s family had been so nice to us?
“It’s really important to us.  We can’t risk losing it.”
“How much does it cost?” he asked.
“Not a lot, maybe twenty dollars, but we need it,” I said, a little nervously.
“It’s the only map you have?”
“No, we have about ten, but each one is for a different area.”  Maybe he understood.  Maybe I hadn’t broken through the language barrier.
“I’m going moose hunting tonight.  Can I borrow it?”
“You can, but you have to understand that if we don’t get it back, we’re fucked.”
“Yah.  No problem.”
“Okay, so it has to be back on this table by 9:00 tomorrow morning, when we launch.”