The river flowed smoothly through a clear, sunny, summer day. Despite the beginning of August, and the heat dome we’d read about encompassing the U.S., each day, northward bound, the temperature cooled a bit more.
We paddled around an island to the left. Once passed it, we looked back at the side we skipped and saw a column of smoke rising from a campfire, so we paddled back to investigate.
A young boy ran to get his dad. Danny came, and helped us ashore. He showed us around, introduced us to his family, and gave us a flag as a gift. In exchange, I gave him a card. Danny was an Atikamekw public relations worker in Montreal, visiting the country cabin he’d built for a few days. He’d started learning English a few weeks earlier and spoke it fluently.
He taught us how to say hello (“quay”), goodbye (I don’t remember), and the real name of the river in Atikamekw. He explained the symbolism of the flag. A circle represents the importance of unity. Four directions represent the four elements, and the different parts of a whole person: physical, psychological, emotional, and spiritual. North is for the children, east for the young, south for the old, and west for the dead, which being in a circle, is not the end. Three stars represent all Atikamekw Nehirowisiw Communities, Wemotaci, Opitciwan and Manawan.*
He told us his friend Simon lived in a shack not too far up river, and he’d be happy to host us.
With the flag tucked away in a hatch, we continued northbound. Six months later I’d have this flag displayed prominently in my home.
Then, just south of Rapides de la Chandier, the current grew too strong and we had to portage. A forest road ran along the west side of the river, and our put-in, at the top of the last remaining waterfall on the St. Maurice, lay a mile and a half up-hill.
While we ate dinner, a group of seven our eight First Nations canoes paddled down the river. We called out to them “quay” and waved.
Bear bagging is hard.

*This may be the most educational I’ve ever tried to be. 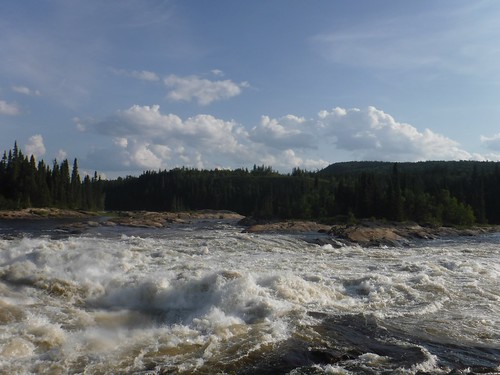