Saturday night I looked at the weather.  Sunday morning was expecting perfect kayaking weather, Sunday night, a storm.  And in between, the glassy morning waters and idyllic conditions would dissolve into chaos. 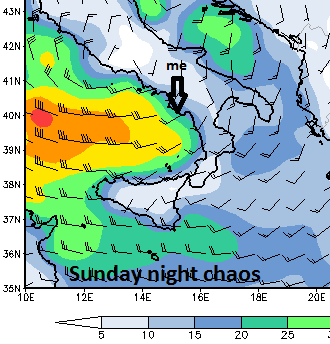 At first I wasn’t sure if I would go out at all.  The calm before the storm is no time to mess around.  But it would be calm, or so the forecast insisted.  And as for the storm, I have mad skills so long as I have the energy to use them.  I could leave early and paddle for a few hours, that way I would most likely have smooth sailing and if not, I wouldn’t be out for so long that my body would go into calorie debt leaving my mind in the dark places and my skills in the dust.  Also, while proceeding days of the storm would bring a headwind, Sunday would bring a tailwind so it was now or Thursday.

The mayor had told me he would find me a place to stay the next night also and I thought, Pisciotta looked good.  A distance of about 10 nautical miles was just right for a half day.

“I can help you for Marina di Camerota.”  He told me.

I looked at my map.  Marina di Camerota was 20 nautical miles away, if I hugged the coast, farther. I would most likely finish with a substantial tailwind.  I would make great time, but be exhausted ... when I arrive at my hotel.

My alarm clock goes off at 5:00am every morning.  But in anticipation of the trials ahead I woke at 4:20 and I was in my kayak paddling two hours later.

The sun rose behind clouds over mountains.  I passed a shadowy tower that stood over a dark fallow. Then I left shoreline to cross a bay about five miles out.

At first small waves and wind came from the mainland land with an occasional set of larger swells coming from the sea.  But gradually the frequency of the swells increased and the wind joined them.

There was about twenty minutes in the middle where the forces seemed to be even and the water was glassy smooth.  Then another set of swells came.  The wind picked up, and more swells.

From there on I had my tailwind and waves shoving me along.  I was able to surf some.  And before long I was at the cliffs at the end of the bay.

Tall, sheer, and vibrantly black, grey, white, and orange, they were covered far above me by wild grass and a few trees.  Tough bushed clung tenaciously to there rocky faces.  There were at least four or five sea caves large enough to invite a kayak, but conscious as I was of the worsening conditions and weary of the dangers of a large swell catching me inside, I passed near but did not enter.

Around the corner the wind was powerful and coming off off the cliffs in what I suspect was a vertical eddie.  The blast grabbed the top of my paddle repeatedly and wrestled with me for control.  Bult I held strong and pushed forward.  Once I was around the point, the wind died down substantially.

I was tired, oh so tired.  Maybe I had been a little lax and not eaten quite enough.  In anticipation of the weather I ate my pasta first and switched to my chia seeds as the conditions worsened.  I guess it was important that I switch off every hour mixing things up to maintain a more even calorie intake.

The last few miles I passed jagged black and white rock formations on the shore and islands.  The sea changed from a dark blue to a light blue and a steady tail breeze helped me into port.

I spoke with Stephano and he made some calls.  The city of Marina di Camerota was happy to put me in a hotel for the next few days of storm.  Never did I imagine that I would be kayaking in such style.  For now, thanks to Dr Bronner’s, my clothes are clean, my pots and nalgenes are clean, and I smell nice.  I have a warm bed.  How can life be so good?  How long can expect it to last?